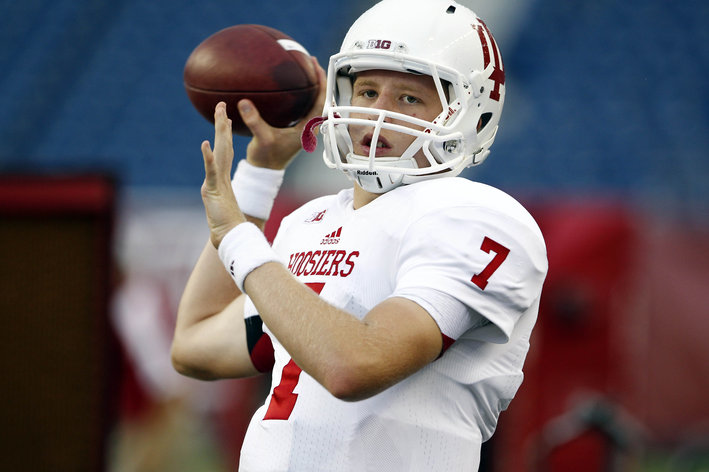 Does Nate Sudfeld have the offense to keep the Badgers back on their heels? – Mark L. Baer-US PRESSWIRE

The Badgers have a surprisingly big road test against a rival next week Could Indiana go all Admiral Akbar on us?

Suddenly, we can’t not take Minnesota seriously. The Gophers have been rolling, and they’ve been winning games they usually don’t. Gameday may be going to the Twin Cities next week. And Indiana’s being a little bit ignored in the public consciousness.

The conditions would be in favor of a trap. One would think so, anyway, at least until you realize just how bad Indiana’s defense is. Here’s a list of categories the Hooisers are 100th or worse in:

Add those aspects together, and you’re looking at the 122nd-ranked total defense. Or to put it another way, three members of the secondary (Greg Heban, Mark Murphy and Tim Bennett) are averaging over seven tackles a game. And if you have that issue, offenses are going to have a good time.

Joel Stave’s still not won everyone over yet as the weather’s played tricks on his arm, but with a healthy Jared Abbrederis and a hot Jacob Pedersen? There’s a chance the passing game is going to have some efficient fun. But that’s not why the Badgers look to outshoot the Hoosiers.

Because here’s the thing. The Hoosiers had a half-decent run defense going. They bottled up a decent Bowling Green attack, and shut down Penn State to get what was once considered an upset win. But over their last four games, the wheels have fallen off. Teams have gone for 896 yards and 16 touchdowns on the ground alone against Indiana. And sure, the Hoosiers struggled when facing Navy (but that happens when there’s a triple-option) and Missouri (because it’s a good SEC team).

But while Minnesota is the closest thing to a good rushing offense, the Gophers are 46th on a per-play basis. Michigan State’s 60th, Illinois is 81st and Michigan? The Wolverines are only generating 3.25 yards a carry counting their gashing of the Hoosiers. That’s good for 111th. This sort of momentum bodes as well as well could be for both James White and Melvin Gordon. And while we’ve realized that Corey Clement isn’t going to crack this backfield right away, we could well see what he’s been up to this Saturday.

High expectations, man. And they could come together for beaucoup points.

I mean, we’re not looking at the Badgers trying to put up 80 in a desperate attempt to make sure the BCS gives our team the love it deserves. But the thing of it is, Indiana has the horses to keep scoring against the Badgers defense. I mean, the Hoosiers aren’t with one of those mobile/accurate types as a starting quarterback. Nate Sudfeld’s not anything close to Tre Roberson.

But Sudfeld has a strong arm and four good receivers to throw to. Cody Latimer and Kofi Hughes are both 6’2 or taller. Shane Wynn is tiny and quick. John Bolser’s got talent that put him under consideration for the John Mackey Award. They have receivers that could make the Badgers play for a poorly timed blitz.

But this is also the sort of game where some well-timed attacks could make for big plays. Tevin Coleman killed the Illini for 14-plus yards per carry before he went down for injury. Stephen Houston is servicable, but this is basically the front seven that held Indiana for under 3 yards per carry last season with the game on the line. You can expect a passing game where the balance comes from distribution.

The Badgers have held Indiana down like a swaggering bully in an ’80s movie over the past few seasons. We’ve struck hard, struck fast and shown very little mercy. This season is another where Indiana has something to play for (it desperately needs a win here for bowl eligibility) and the offense will get some things done.

But man, the pace the Hoosiers want to play on offense and the defense set before us makes me think the Badgers could be in line for a new season-high in points. Coaches Vs. Cancer – Suits and Sneakers