If the Green Bay Packers’ coaching or medical staffs intend to shut Aaron Rodgers down for the season, they haven’t told their quarterback.

NFL Network’s Ian Rapoport reported on Sunday morning that Rodgers would “be lucky” to return in time for the team’s game next Sunday against the Atlanta Falcons at Lambeau Field. Rapoport cited a source with direct knowledge of Rodgers’ fractured left collarbone.

Citing that same source, Rapoport reported that if Rodgers can’t go this week against the Falcons and the Packers have no chance at making the NFC playoffs, it’s possible the Packers would shut Rodgers down for the rest of the season. The Packers, who were 5-2 with Rodgers at quarterback, are 5-6-1 with four games to play.

Told of the report, Rodgers said in an iMessage, “I don’t plan on playing ’til I’m 30.” Rodgers’ 30th birthday is Monday.
Rodgers also said that he has not been examined since before Thanksgiving. The Packers players have been off since Thursday and have scattered about the country.

The Packers lost to the Detroit Lions on Thanksgiving, 40-10, and are now 0-4-1 since Rodgers fractured his left collarbone at the end of the first offensive series against the Chicago Bears on Nov. 4. After the Packers’ loss to the Lions, Rodgers said that he expected to play against the Falcons.

“We’ve got 10 days until the Atlanta game,” Rodgers wrote in an iMessage after the game. “That should be long enough.”

The Packers have started four quarterbacks this season – Rodgers, Seneca Wallace, Scott Tolzien and Matt Flynn. It’s thought to be the first time in the team’s 93-year history that four different quarterbacks have started a game in the same season. Official records only go back to 1959.

Speaking on his weekly radio show on Nov. 19, Rodgers insisted that his season wasn’t over, even if it meant coming back with the team out of contention.

Asked if there was a chance he’d be shut down if there was nothing to play for by the time he was cleared, Rodgers replied: “No. It’s not my personality. I don’t want to do that.”

While it could be for his own good, it’s likely that the Packers would have a very angry quarterback on their hands if they decided to shut him down even though he could be medically cleared to play and wanted to play. At no point since the injury has Rodgers publicly contemplated the possibility of not playing again this season.

Before the collarbone injury, Rodgers had only missed one game due to injury since being elevated to starter before the 2008 season. He finished a 2006 game with a broken foot, played through a dislocated right (throwing) shoulder in 2008 and missed one game during the team’s Super Bowl XLV-winning season of 2010 with his second concussion that year.

Rodgers said last Tuesday that while coach Mike McCarthy and team physician Dr. Patrick McKenzie have a role in making sure he doesn’t push himself too far too soon, he is sure that he knows his limits.

“I respect their opinion, so I obviously listen to them and take all that into account, but I think we’ve come to some agreements during my years as a player and a starter where we might not all agree that it’s right to play, but we agree that the risk is low enough that if I feel good enough to play, I can play,” Rodgers said. “I think that’s kind of the way that we operate. I trust Mike to kind of save me from myself at times, and Doc to be the voice of reason.

“But I know my body better than anybody and it’s just a matter of combining the strength, the flexibility, the lack of pain and the low-risk. And when all those align, then I’ll be back on the field.”

Listen to Jason Wilde every weekday from 9 a.m. to 10 a.m. on “Green & Gold Today” on 540 ESPN, and follow him on Twitter at twitter.com/jasonjwilde.

Brought To You By: 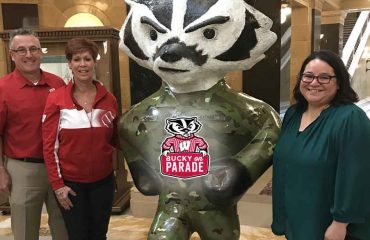 Bucky on Parade Unveilling – Every Veteran is a Story – Have you found your Bucky yet?

Do You Really Need A Home Security System