Green Bay Packers vs. Chicago Bears – The Breakdown for MNF 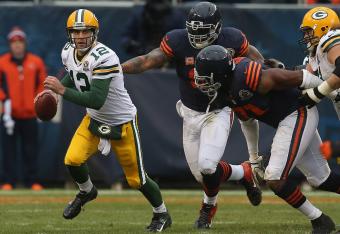 So the Packers have this, and other trends, in their favor heading into a Monday night game with the rival Bears at Lambeau Field.

Why the Bears will cover the spread

Chicago quarterback Jay Cutler is out, but backup Josh McCown, who has 33 NFL starts under his belt, looked good in relief two weeks ago against Washington. Now he’s had the bye week to get ready for the matchup against Green Bay.

And he has some weapons to work with, with Matt Forte, Brandon Marshall and Alshon Jeffery at the skill spots. And 10 points is a lot for a rivalry game like this. The Bears are on a profitable 7-3-1 ATS run on Mondays.

Why the Packers will cover the spread

Green Bay, with a big boost from rookie running back Eddie Lacy, has rushed for over 100 yards six games in a row. The Packers are 5-1 both SU and ATS those six games. The Pack is a little banged up on both sides of the ball, but just like during their run to the Super Bowl a few years ago, they’ve had backups step in and step up with quality play.

Never forget the value of Aaron Rodgers and his 8-0 ATS run as a home favorite.

The OddsShark predictor computer is calling for the Packers to win a high-scoring affair, but for the Bears to cover. Green Bay looks very dangerous on offense, with its new-found ability to run the ball. The Packers have also beaten Chicago six times in a row. And Lambeau should be rockin’ for this Monday night melee.

Give the points and go with Green Bay.

Note: All spread and odds data powered by Odds Shark – follow them on Twitter for injury updates and line move updates.