When hanging out in this home theater room, it’s hard to feel anything but blue—and that’s a good thing. 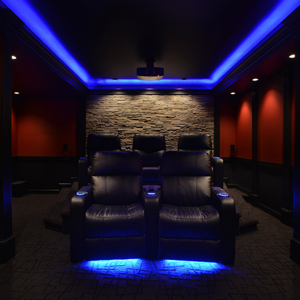 One of the many design elements in Steve Loving’s basement theater is a blue ring that wraps around the ceiling of the room and gives off a warm glow from underneath the five cushy Palliser Elite theater seats. LED rope lighting doesn’t always seem that high-tech, but on this ceiling, it adds an elegant, incredibly slick effect to the space. The atmosphere it creates might have something to do with the way the lighting was “meticulously mounted” out of sight around the room, just below the crown molding.

“The crown molding is 4 inches from the ceiling to allow for the natural ‘spill’ of light to fill the space,” Steve says. “I chose blue, since it would match the accent lighting underneath the seats and within the cup holders. We don’t have these lights on often, really only to show the room and for photos.”

While Steve may not show off the rope lighting all that often, there are other details that visitors can’t miss. For instance, the back wall is coated in dry-stack stone, which make this room unlike many out there. Of course, some may think there’s a reason for that, citing the effects that this material could have on the room’s acoustics. However, Steve says that despite the different appearance, it doesn’t interfere with the sound one bit.

What it does interfere with is what a lot of people think of as typical home theater decor. That’s because Steve wanted to use that space to make the room truly unique. Sourced from Veneerstone, the materials were special ordered from Home Depot. Besides the wait, however, it didn’t create any challenges with the installation, the calibration, or current use.

“Acoustically, it actually doesn’t pose any issues from what I’ve noticed,” he says. “I feel that this has a lot to do with the spacing between the dry stack and the variances within the stone.”

Another interesting aesthetic is the actual shape of the room. Measuring 21 feet long, Steve says that it has “modified T-shape,” which means it varies in width. “The front wall by the screen is 10-feet wide, the room bumps out to 14-feet wide, and transitions further to 17-feet wide in the back,” he says. “The entrance is a double French door angled for architectural interest and to align with the natural angles on the seating and the platform.”

That platform is pretty unique as well, designed to both accommodate the angles of his curved Palliser Elite Series theater seats, as well as to align a triangular pattern towards the center point of the front wall/screen, 12 inches from center.

Of course, there are plenty of other things to ogle in this room—mainly the imagery projected from the JVC Pro 1080p 3D projector onto the 110-inch DragonFly high-contrast screen. Steve can control everything, including lighting, through the URC MX-880 remote.